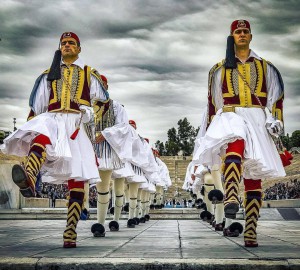 The 2004 Summer Olympic Games (Θερινοί Ολυμπιακοί Αγώνες 2004, Therinoí Olympiakoí Agónes 2004, [1] officially known as the Games of the XXVIII Olympiadand commonly known as Athens 2004, was a premier international multi-sport event held in Athens, Greece, from 13 to 29 August 2004 with the motto Welcome Home. (Source: Wikipedia)

The Hellenic Presidential Guard departing at the end of the Olympic Torch Handover Ceremony that took place at the Panathinaikon Stadium. After a week-long torch relay in Greece, the flame that was lit in Ancient Olympia was handed over by the President of the Hellenic Olympic Committee Spyros Capralos to the President of the PyeongChang2018 Winter Olympic Games.