The article in the comment below was published in New York Times.

The author is missing the whole point of the looting and vandalism and pretends the British have the marbles in some legitimate way!

His statement: “…the British still make the better case” is based on foolish arguments like the vast majority of people including the British are rooting for the “Greeks playing the underdog role of the old Red Sox vs NY Yankees”

Elgin did not “spirited them [sculptures] from the Acropolis in Athens”, but he literally hacked them off the solid marble blocks and he vandalized the Temple.

There are countless such statements and assumptions not only for the Parthenon Marbles but in the other references to other major pieces of antiquity that have been looted, including the statement that Zahi Hawass, Egypt’s chief archaeologist, made recent “fuss” about the Rosetta Stone.

Of course one who writes that “today’s Acropolis is itself a kind of fiction” he has not experienced being there. Just by walking up the steps pass the Propylaea, one will feel the admiration. Being there. At the Acropolis.
Should this kind of journalism published by NYT?

The Looting of Antiquities 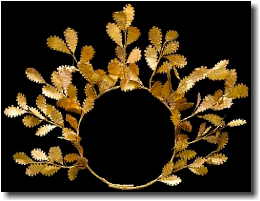 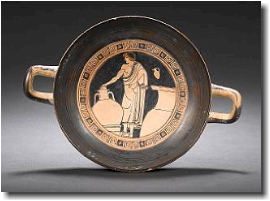 These Hellenic artifacts were recently auctioned at Bonhams in UK.

Unfortunately the Greek Government had no proof that the wreath had left the country illegally. e-typos.com

The Greek officials interest is on a delicate wreath made of fine gold oak leaves resemble the ones worn by the Macedonian kings as Alexander the Great’s father, Philip II. It is obvious that thieves at some point have vandalized and looted artifacts not much different of what Elgin did for the Parthenon Marbles.

Walking with the Gods of Ancient Athens and Lord Elgin, the vandal

“…On the approach to the Museum’s entrance, a huge oval balcony in plate glass gives way to a deep well exposing the ruins of ancient Athens at the foot of the Acropolis. Suddenly… ”
By KitChapman, April 17, 2010

The Monday. 26 April 2010 edition of UK EXPRESS writes “DOUBTS over Nick Clegg’s commitment to British interests in the EU intensified last night after it emerged he once led a campaign to return the historic Elgin Marbles to his friends in Greece.” He is going on to say: “…the Lib Dem leader berated the British Museum for guarding the statues, saying it was like displaying Big Ben’s clock in the Louvre…” (By Ted Jeory, read more…)

Lib-Dem leader Nick Clegg is seen as “Europhile”. It is viewed that the Lib-Dems are willing to return the Parthenon Marbles to Greece. Is this the concensus? What about David Cameron (Conservative) and Gordon Brown (Labour)? Does Clegg have a chance to really increase the Lib-Dem seats for having more power?
What our UK friends have to say?

A perspective from Things That Never Made It Into Print…