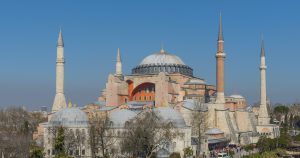 The Cathedral dedicated to the Holy Wisdom of God, Hagia Sophia, was completed in 537 AD under the reign of Roman Emperor Justinian I. As the basilica structure is the epitome of Byzantine architecture, today the property is inscribed in UNESCO’s World Heritage List.

Hagia Sophia Church was decreed a museum by the Turkey’s Council of Ministers in 1934 and it is with regret that the world community sees this overturned by a Turkish court which carries no independence and serves the expedient needs of the government.

Inevitably Christians around the world have been saddened by this decision which seems to perpetuate their exclusion from their ancestral temple. However, this decree only proves Turkey’s disdain and contempt for their neighbours and world order.

Turkey with one swipe of a pen in a decree took the spotlight off the genocide and ethnic cleansing of Christian populations, between 1908-1923; crimes on which the Turkish nation was founded. Media no longer holds Turkey accountable for the pogrom of 1955; an act which led to mass immigration and for which damages Turkish courts never gave restitution. More recently, the media no longer covers the detention of over 150,000 of its own citizens who are opposed to the government, the imprisonment of journalists, the mock trial for the assassination of Jamal Khashoggi, Turkey’s consistent aggression into the Aegean, the expelling of countless long-time resident foreign workers into Greece while holding Syrian refugees hostage in refugee camps , Turkey’s intervention into Libya, a clear violation of the UNAOC mission and the UNESCO designation of Hagia Sophia, and much more. Inevitably, Christians and reasonable, ethical and moral persons world-wide are saddened.

The unilateral decreed change of status of Hagia Sophia only proves that Turkey has no scruples when it comes to manipulating the media and Turley has no credibility in its interactions with the world community.

Please sign the petition and let us mirror this unilateral decree of a court which carries no independence with our voice.