The year 2021 marks the Bicentennial Celebration of Greece’s War of Independence and the creation of Modern Greece as the Hellenic Republic in a continuation of Hellas and Hellenes long history since the antiquity.

Greek Independence Day, decreed a national holiday as early as 1838, is celebrated annually on March 25.  The Greek uprising for Independence date in 1821 coincides with the Greek Orthodox religious holiday of the Annunciation of the Theotokos (Virgin Mary), which strengthened the call for freedom.

It all started with the prominent Phanariote Prince Alexander Ypsilantis, one of the leaders of Filiki Eteria (Φιλική Εταιρεία). The Filiki Eteria was a Society of friends, mainly young Greeks, forming a secret  organization founded in 1814 in Odessa with the purpose to overthrow the Ottoman rule. In the spring of 1821 the Society initiated the revolution against the Ottoman Empire.  Consequently, on March 17th, the Maniots of Areopoli declared war on the Turks and under the command of Petros Mavromichalis, 2000 Maniots entered the city of Kalamata and joined forces with Commanders Theodoros Kolokotronis, Nikitaras and Papaflessas.  Securing the liberty of Kalamata was the first major step towards the Independence. 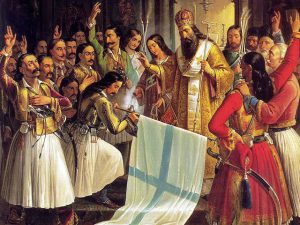 Lord Byron’s Oath on the Grave of Markos Mpotsaris

The liberation troops then marched straight to Agia Lavra at Kalavryta, a mountainous region in northern Peloponnese, where they met with Bishop Germanos of Old Patras.  On March 25th 1821, following the Doxology, Bishop Germanos raised the revolutionary flag outside the gate of the Agia Lavra Monastery.  Empowered by the Bishop’s emblematic blessing, the “Messenian State” issued its official declaration to foreign governments.

Hence, the call to “Eleftheria i Thanatos” [Liberty or Death] voiced in 1821 celebrates its bicentennial anniversary this year, March 25th, 2021.

Historically, the occupation by Ottoman Rule was marked by the plundering of Constantinople, the jewel Hellenism and Orthodox Christianity, in 1453.  Within the 150 years that followed, the Ottoman Empire had besieged all of mainland Greece, most of the islands and expanded through the Balkans.

Ottoman rule lasted 400 years during which Turks oppressed, taxed, tortured and enslaved the  Greek people.   Education was minimal and conducted in “secret schools – kryfo sholio” at Monasteries and churches keeping the flame of Hellenic culture alive.  Taxation forced poverty among the majority of the people who lived in rural areas.  The heaviest tax being levied against the oppressed Greeks was the enslavement of their children, who were kidnapped to be trained and enlisted as Janissary (a Turkish system of child slavery by which Christian boys were enslaved, converted to Islam and incorporated into the elite army corps.)

Conditions were so dark that the feeling was “one hour of freedom was better than forty years of slavery and confinement” (Καλύτερα μιας ώρας ελεύθερη ζωή παρά 40 χρόνια σκλαβιά και φυλακή) as the folklore saying goes.  After 400 years of slavery, Greeks had to risk their lives for their freedom, thus the call to Liberty or Death (Ελευθερία ή Θάνατος).  The thirst of freedom and the spiritual awakening “To You Invincible Champion Theotokos” [ Τη Υπερμάχω Στρατηγώ], fortified their spirits over the many centuries and empowered their determination to combat the feared enemy. Thus, on March 25th 1821 they convened at Agia Lavra of Kalavryta starting a new glorious chapter in Hellenic history.

Even before the official declaration by the “Messenian State”, there were those who believed in the cause and who helped in other ways. There were six “American Philhellenes” from the United States who contributed greatly to Greece’s efforts to gain independence from Ottoman Turkey at the very beginning of the War of Independence in 1821. They were, Congressman Daniel Webster, Congressman Henry Clay, George Jarvis, Captain Jonathan Miller, William Townshend Washington, and Dr. Samuel Gridley Howe.

Philhellenes were an integral part of Greece’s Independence without whom the outcome might not have been successful.  These persons selflessly dedicated themselves to the noble cause of freedom from tyranny and slavery.  By exhibiting altruism and selflessness, they secured the betterment of Greek people.  Many relentlessly raised money, while others joined active battle. The big powers of the time were all supportive.  The U.K. secured a fleet of ships for the Greeks, as France, and Russia helped destroy an Ottoman fleet at the Battle of Navarino. 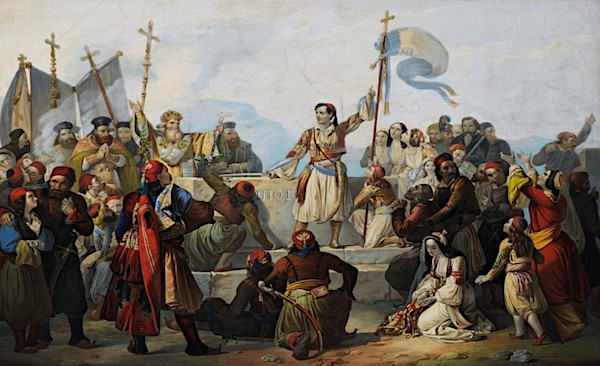 Lord Byron’s Oath at the grave of Markos Mpotsaris

Most notably, Philhellene Englishman Lord Byron left the aristocratic comfort of his home and joined the Greek War of Independence fighting the Ottoman Empire.  He died three years later in 1824 at the age of 36 from a fever contracted after the First and Second Siege of Messolonghi (Μεσολόγγι). The Greeks revere him as a national hero.

The epic struggle for independence is filled with important heroic figures as Andreas Vokos nicknamed Miaoulis, Rigas Feraios or Rigas Velestinlis, Constantine Kanaris, Manto Mavrogenous, Odysseas Androutsos, and many more which are engraved forever in our hearts and the Hellenic History.

On this 200 year anniversary of the “Greek War of Independence 1821”, we remember the sacrifices and the efforts of our ancestors who risked their lives for Greeks to gain their freedom from Ottoman Rule and, consequently, to mark Greece’s birth as a sovereign nation into the modern era.

Greek Independence Day is a momentous occasion. It is a commemoration of the survival of all the achievements of the Greek people. The wide range of achievements by Greeks throughout the millennia touches all disciplines, from the Democratic principles to Mathematics, Sciences and Medicine, to Philosophy, Arts and Literature, bettering all aspects of human lives.

Today, when peoples world-wide value freedom and the contributions by Hellenes over the centuries, this day proves that a feared enemy can be conquered.

On this 200 year anniversary of the “Greek War of Independence 1821” we cry out Zeto-Ζήτω Long Live Hellas and Hellenes, because without Freedom we are not truly living.

Composed and published by the HEC Team of volunteers.
Some photographs and info was obtained from Wikipedia