Originates from the actions of Thomas Bruce 7th Earl of Elgin, in removing much of the sculpture from the Parthenon in the early C19 to decorate his house in Scotland. Debts later forced him to sell the above sculptures to the British Museum where they become known as the Elgin Marbles. Urban Dictionary 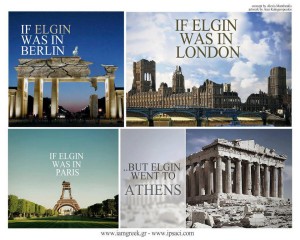