Anna Diamantopoulou, a former EU Commissioner and Minister to the Greek Parliament was nominated for the upcoming position of General-Secretary to the OECD, an international organization serving as an official Observer to the United Nations.   The Organization for Economic Cooperation and Development (OECD) is mandated to build policies to better the quality of life around the globe.

On February 10th, following the 3rd round of consultations by the Heads of Delegations, the 10 candidates were ranked in order of preference with Anna Dimamantopoulou ranking 4th. 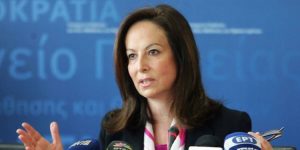 In an article published by FORBES on the 27th November 2020 Anna Diamantopoulos clearly outlines her her priorities for a more inclusive world.   The interview conducted by Stéphanie Fillion, a Canadian reporter covering foreign affairs at the UN, demonstrates how Anna Diamanopoulos’ tenure and experience as an elected official led her to collaborate with OECD on key matters such as education, industrial policy and social justice.  Her commitment to OECD stems from her personal insight knowing that OECD can support member and nonmember states to better their quality of life.

A remarkable woman who continues to value the well-being of all people, she herself staying true to her beginnings, was endeared by young and aspiring students, during her career as an elected politician to the Greek Parliament, as “the women who cares about us”.

Recognized by her peers, an interview video with George Kouvaras has been streamed by ICC Women Hellas in Facebook.

Her ethos and character, as well as her professional competence and experience, are an example to all, women and men, of all backgrounds.

OECD will most certainly bring acute oversight to economic justice with Anna Diamantopoulou as General-Secretary to OECD.