A Hellenic Patriot and Benefactor

No matter what period we turn to in our Hellenic past, from antiquity to the modern era, we will find persons of great character and integrity forged with patriotism and sacrifice.

Too often we class sacrifices made to a nation with major conflicts, engaging warfare and great danger. All along the long history of the Hellenic nation, numerous battles and fierce negotiations have proven men to be heroes, whom we honour.

Sacrifice, however, originates from the heart and necessitates great fortitude and self denial.  One such sacrifice was materialized by Iakovos Tsounis earlier this year when he donated his entire fortune, 23 million euros and 60 landing crafts to the Hellenic Armed Forces; thus, marking his donation beyond philanthropy and touching upon sacrifice.

Iakovos Tsounis, was born in Eglykada neighbourhood in the eastern part of the city of Patras on  June 20, 1925. He led a remarkable full life.  Being a descendant of the Greek Revolutionary Heroes of 1821, Iakovos Tsounis was instilled with the duty of defending his homeland.  Hence, it is not surprising to learn that at the tender age of 16 he enlisted as a volunteer in the Greek-Italian War 1940, becoming a WWII Veteran.

Professionally, Iakovos Tsounis entered the shipping industry in 1966, acquiring ships and creating his fortune.  As the exceptional person Iakovos Tsounis was, his commitment to his business life did not steer him away from his vocation.  His charitable activity covered a wide range of areas, but always centered on bridging the gap between the informed and uninformed, the fortunate and unfortunate.    Among his many personal contributions to Greek people have been the creation of a Museum and the renovation of a historic church in Kastellorizo.

The Greek Government rewarded his large donation of 23 million euros and 60 landing crafts to the Hellenic Army with the Presidential Decree on February 16th, 2021; the Grand Cross of the Order of Honour, granting the status of Reserve Officer and rank of Lieutenant General.

Having resided at the Military Hospital 407 until his passing yesterday, April 10th, 2020, Iakovos Tsounis leaves a legacy for all Hellenes.  The man who gave everything to his nation will live on forever, with his name inscribed in the nation’s diptychs of great benefactors. 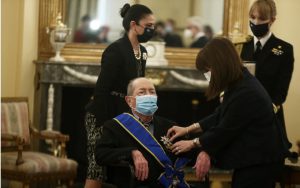 On February 24 this year, Tsounis was awarded with the Grand Cross of the Order of Honor by President Katerina Sakellaropoulou.

Poseidon-Hellas and the Sea, launched in 1996 by Hellenic Electronic Center, wishes to honour Iakovos  Tsounis for his foresight and example that “without a nation a man has no fortune”.   Certainly, Iakovos Tsounis will also live on as an example for all Poseidonians that there is no sacrifice unless we have given everything we have to the nation we love and belong to.