March 25th, the 201st Year Anniversary of the Greek War of Independence 1821

The 25th of March has a special meaning to Hellenes as it is a double celebration. As Orthodox Christians we celebrate the Annunciation by archangel Gabriel to the Virgin Mary that she would become the mother of Jesus Christ the Son of God [Ευαγγελισμός της Θεοτόκου].  As Hellenes we celebrate our Independence from the Ottoman Empire, resulting from the successful Greek War of Independence (1821–1829), which was fought to liberate Greece from four centuries of Ottoman occupation. 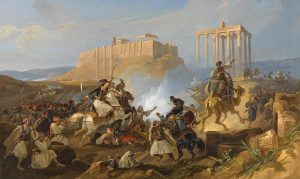 The revolution was organised by the organisation known as the Filiki Eteria [Φιλική Εταιρεία] or Society of Friends; a secret organization founded in Odessa by Hellenes in 1814, whose purpose was to overthrow the Ottoman rule and establish an independent Greek state.  Its members were mainly Greeks from Constantinople and the Russian Empire, but also included political and military leaders from the Greek mainland and islands.

This day being a public holiday in Greece and Cyprus, on the very day of a high religious holiday, it is custom to first gather at church for the holiday of Evagelismos and the Doxologia which follows in memory of the all fallen soldiers.  Following the church service, everyone gathers for the community parade where representatives of all organizations and associations, religious and secular, march in all major cities.  The day ends with family gatherings for the traditional fish meal, in honor of the religious holiday, which always falls during the fasting period before Easter.  Indeed, a date inscribed in the hearts of all modern Greeks world-wide; when the Greek Flag is risen high by every Greek home.

The occupation of Hellenes by Ottoman Rule was characterized by 400 years of dark conditions: heavy taxation, forced islamization, controlled movements, and the heaviest of all, the recruitment of Janitsary.  Janitsary were Ottoman elite infantry units made up through the system of child levy, by which non-Turks (mainly Greeks, Armenians, Bulgarians and Serbs) were taken, subjected to circumcision and conversion to Islam, and incorporated into the Ottoman army.

Saint Cosmas of Aetolia, while preaching throughout mainland Greece, comforted the Greek people and encouraged the opening of churches and schools, because Education was valued by the Orthodox Faith. Historians have located over 20 schools in mainland Greece during Ottoman Rule. However, schools and churches were at the discretion of the local Ottoman Ruler, who had the authority to close them in accordance to his temperament.  Early on from the 16th century, fanaticism reigned among the Sultan’s advisors, who not only restricted Orthodox churches and Schools, but in 1711 also outlawed science literature in Muslim Libraries. There was no consistent and continual approach for the existence and operation of Orthodox churches and schools.

Nikolaos Gyzis an acclaimed national artist, featured the “Kryfo Scholio” [Κρυφό Σχολιό] portrait in 1885/86. Family tales rooted in the image, which captured the intellectual and academic nurturing of 400 years, overshadowed the reality of the scarce schools which existed under Ottoman Rule. That Greek schools existed and operated at the discretion of local Ottoman Rulers, does not preclude the fact that the clergy also gathered students. The “Kryfo Scholio” was referred to as secret in that the teaching by the clergy was private, far from the supervisory presence of Ottoman Rule subsequent to a school closing. Here, in private, the clergy taught with the Psalter and the Oktoechos as prescribed by Saint Cosmas of Aetolia during his sermons.

History of the Revolution

Unsuccessful revolts arose mainly in the Danubian principalities, but the first successful battle was in Kalamata when 2000 Maniotes under Petros Mavromihalis, rendered assistance to the commanders Kolokotronis, Nikitaras and Papaflessas.  Upon securing the freedom of Kalamata, they immediately marched to Holy Lavra Monastery in Kalavryta.  At Holy Lavra Monastery, on March 25th, after the Liturgy for the Annunciation, they bowed before the revolutionary flag raised by Bishop Germanos of Patras outside the Monastery gate. The importance of the religious holiday and the blessing of Bishop Germanos emboldened the Greek people to combat the feared enemy.

Modern Challenges to the Revolution’s Legacy

Moving past the 200-year anniversary of Greek Independence, we justifiably stand committed to the relevance of this religious and national Holiday. Heritage and identity dictate that as descendants of the Great War Heros and the Greek people who fought for Independence, we too must stand tall and with integrity. Heritage and identity also dictate that true joy accompany the Greek Freedom gained in 1821 and true joy resides in knowing our history.

One of the challenges met with globalism is history revisionism. Historic legends and heroes are scrutinized and identity is dared. Younger Greek generations face major blows when the cultural story no longer reflects the contemporary narrative.

Let us examine the 2 major modern-day dares faced by Hellenes around the globe as we set off on the 3rd century of Greek Independence from Ottoman Rule. First, we Hellenes find ourselves examining the character of the Greek war heroes of 1821 who are labelled as vicious by well-intended scholars. Secondly, the “Krifo Scholio”, an image of grace, solidarity and love, is called a myth.

The Greek War of Independence 1821 was fought for the sake of the “Faith and the Homeland” [υπέρ Πίστεως και Πατρίδος]. With Christ beating in their hearts, they fought for the safety of their families, for their Holy Christian Faith and for their homeland’s Freedom. The Greek Heroes did not fight for social justice or a better recognition of their rights within their nation. Greek Heroes fought for the basic and essential reasons of Freedom and Justice. Their call to ‘Freedom or Death’ [Ελευθερία ή Θάνατος] determined their commitment and resulted from 400 years of slavery whereby “one hour of freedom was better than 40 years (a life-time) of slavery and confinement”. Current criteria analyzing war crimes does not apply once the ethos of the Greek Hero fighting for freedom and justice is understood to be one of last resort. The feared enemy was not only more skilled but outnumbered the Greek Heros. Makrygiannis putting his Faith in God shouted out at the Battle of the Lerna Mills (1825), “we may be few and weak, but we have Almighty God on our side and we will win”.

This year, the 201-year anniversary of the Greek war of Independence 1821, we cry out with true joy Zeto-Ζήτω. Long-Live Greece, our Hellas, and Hellenes and Greeks world-wide. Freedom is a cherished value and one we fought for with honour.