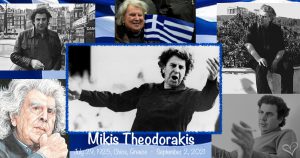 Videos below…
Theodorakis was a towering figure in Greek life. A world renowned composer, activist and politician. Born of a family of Cretans in the island of Chios, he joined the resistance against the German and Italian occupation of Greece when he was 17, during World War II. He was imprisoned and tortured by the nazis, exiled multiple times as a resistance fighter during the Greek civil war after WWII,  and then again in the 1960s by the military junta which also had banned his music.

His impeccable music is interwoven in the Greek life. In the world stage, he’s best-known around the world for his film title scores in several movies including the 1964 classic Zorba the Greek, Z in 1969, Serpico in 1973 and others.

“We had all forgotten that he was a mere mortal. But his legacy of music, his political activism and his service to the nation in times of crisis lives on… An iconic composer. A fighter for democracy and social justice. We are deeply saddened by his passing, and are only comforted by the knowledge that his legacy will live on, enriching lives the world over, for generations to come.”
Prime Minister Kyriakos Mitsotakis

“Today we lost a part of Greece’s soul. Mikis Theodorakis, Mikis the teacher, the intellectual, the radical, our Mikis has gone”
Culture Minister Lina Mendoni.

“A towering man with a brooding presence and a shock of wavy hair, Theodorakis’s work evoked a progressive, democratic vision of the world, though his political struggles reflected a darker side of Greece rarely seen by visitors.” Reuters

He will be missed but his music and inspiration will live for ever.

On Monday, September 6, the three-day popular pilgrimage of Mikis Theodorakis began in the chapel of Agios Eleftherios in the Diocese of Athens with a crowd of people flocking to pay tribute to the great creator.