Nana Mouskouri singing “Opa Ni Na Naï” with Danny Kaye and Harry Belafonte,  on the Danny Kaye Show in 1965.  The original was in black & white, this is a cleaned up & colorized video re-released in 2014 as part of a compilation named “Best Of The Danny Kaye Show” by MVD Entertainment Group.

The Danny Kaye Show was an US variety show, hosted by the stage and screen star Danny Kaye, which aired weekly from 1963 to 1967 on the CBS television network.  Danny Kaye was an American actor, singer, dancer, comedian, musician, philanthropist, and cook. He was a tireless fundraiser for charities including UNICEF in which he spearheaded as an ambassador-at-large until his death in March 1987.  Harry Belafonte is an American singer, songwriter, humanitarian and political activist, and actor.

Video posted online by the Victory Sweet Shop Bakery (referred to as the Oldest Greek Bakery in Queens, NY established 1968 in the heart of Astoria) 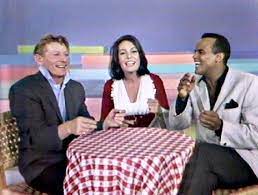