In October 1940, Benito Mussolini, the fascist dictator of Italy, backed by Germany, demanded to invade and occupy Greece requesting Greece to surrender.  In the pre-dawn hours of October 28th, 1940, three hours past midnight, the Italian Ambassador to Greece Emmanuel Grazzi, delivered personally a telegram to the General Ioannis Metaxas’s residence. 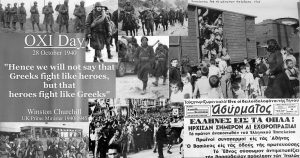 The telegram was sent by Benito Mussolini, the fascist Italian Dictator, asked for an unimpeded invasion of Italian forces into Greece through the Greek-Albanian border; in order, subsequently, to occupy key strategic positions, and all ports and other modes of transportation.  At that time, the plan was to prepare for the later confrontation in North Africa and clear the way to invade Russia  with Greece being the base. 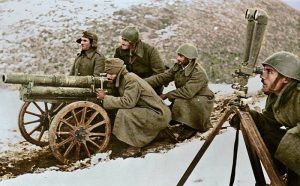 Mussolini did not await a formal reply and by 5 am that very day, the order was given to cross over into Greece with the first casualty being a 27 year old border guard.  Within a few hours, by 9:30 am, an Italian air-borne attack was launched.

A mere 35,000 Greek soldiers under Alexandros Papagos, held back over 135,000 Italian soldiers for several months, until Mussolini ceded defeat on March 21, 1941.

Video “Heroes fight like Greeks” was commissioned by the Archives of the Greek Foreign Ministry (see credits below).

That “No!” in October 28, 1940 brought Greece into the WWII on the side of the Allies. Indeed, for a period, Greece was Britain’s only ally against Hitler.

Not only did Greece rebuke Mussolini’s demands, but seized the offensive and drove the Italians back through most of Albania.

Had Metaxas not said “No!”, it’s arguable that the Second World War may have lasted much longer, and most possibly in favor of the axis, thus we may have a much different world right now. Historians argue that if Greece had surrendered without any resistance forcing a delay and shift of axis forces, it would have enabled Hitler to have invaded Russia in the spring, rather than the disastrous for the axis attempt to battle through the bitter winter and snowy terrain in the Soviet Union.

Inspired by the Greek resistance during the Italian and German invasions, Churchill said,

“all free peoples are deeply impressed by the courage and steadfastness of the Greek nation“,

and in a letter towards the Greek ambassador dated October 29, 1942, he wrote that

“Greece has set the example which every one of us must follow until the despoilers of freedom everywhere have been brought to their just doom.” 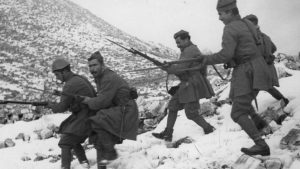