The Fall of Constantinople 1453

The Fall of Constantinople 1453

No siege has been as dramatic and consequential as the fall of Constantinople in 1453.
When it was over,  the world had changed forever.

On a Tuesday,  May 29th 1453, the last Byzantine emperor Constantine XI Palaiologos died, as did his empire, fighting at the city streets alongside his soldiers.  The siege lasted just 53 days – and the armies numbered perhaps 50,000 Turks and 7,000 defenders.

The fall of Constantinople was the event that marked the end of the medieval era, sparked the next phase of the Renaissance, started the age of the discovery and colonization, and also centuries of wars between the European powers and the Ottoman empire.

Greece and the Balkans will remain under the Ottoman rule for almost 400 years suppressing any chance of societal advancement. This time period of the occupied lands is marked as the dark years of Greek history.

A historical documentary video, a brief overview of the time period, with a picture gallery, follows.

Last Service at Hagia Sophia from a book of George Horton

The Greeks of Constantinople by Ted Karakostas

Constantinople, the symbol of Christianity and Greek power in the East, was besieged and conquered on May 29, 1453 AD.

The Byzantine Empire had already begun to weaken after the attack of the 4th Crusade.  The late Byzantine era, from 1204-1453 AD, which will suffer the Fall of Constantinople, is characterized by two distinct periods – the Latin Empire (1204-1261 AD) and the Paleogenic era (1261-1453 AD).

While Constantinople was ruled by the Latins, many nobles took refuge in free areas of the Empire, where, with the help of the locals, they created new states.  Well-known centers of Hellenism were the Empire of Trapezon (1204), the state of Epirus (1215) and the Empire of Nicaea (1208).

In these Greek centers, Hellenism continues to thrive.  Ioannis Vatatzes of Nicaea, Saint and Hero, was able to make the state a force to be reckoned with.  This work was completed by Michael XIII  Palaiologos.   When in 1261 AD. Constantinople comes again under the rule of the Greeks with the help of the general of Nicaea, Alexios Stratigopoulos, Michael VIII Palaiologos was crowned Emperor for the second time in the church of Hagia Sophia.

Difficult years followed where securing the borders, especially from the West, was draining the resources.  Relations between the center, that is, Constantinople, and the provinces were progressively weakening.  The economic crisis was also marked by the weakening and devaluation of the gold currency.  Eventually, mercenaries took over the army and fleet.  The deterioration of the situation led to a civil war between Andronikos II and his grandson (1321-1328).

The nomadic Turks, later known as the Ottomans, were gaining ground.  The Seljuk Turks took advantage of the disintegration of the Caliphate and occupied much of Central Asia.  At the Battle of Matzikeret in 1071 AD, the Byzantines suffered heavy defeat and the Turks consolidated their power in the area.  Already in 1281 AD, the Turks had reached the outskirts of Bursa which became occupied in 1326 AD.  The conquest of Nicaea occurred in 1331 and Nicomedia followed.  Then the cities of Thrace are deserted, one after the other. In 1365, Andrianoupolis became the Sultan’s capital.

It was becoming impossible that Constantinople would be saved.  The Turks had approached the City walls of Constantinople and were already settling in the Balkans.  Emperor Manuel II sought help from the West.  While still in Paris, he receives news that the Turks are under destructive attack by the Mongols in 1402 AD. This gives the Emperor some time.

The City walls again saved the City of Constantinople from attack in 1422 AD.  In 1425, John VIII Palaiologos was crowned Emperor and, like his predecessors, went to the West seeking help.  He too returned with little and empty hands.

Meanwhile, by 1426 AD the Turks occupied the Peloponnese.  This position allowed the Turks to besiege Constantinople regularly, from all directions.

Konstantinos XI Palaiologos was crowned emperor in 1449 AD in full cognizance of his self-sacrifice which was to follow.  On April 6, 1453, the Turks began a regular siege of Constantinople, and on May 29, 1453, the city falls to the Ottomans, despite the heroic stance by the few remaining defenders.

Terrible looting and massacres follow as many civilians fled to other surrounding free areas.

Constantinople was the epicenter of culture and power of both Hellenism and Christianity. With the Fall of the City of Constantinople, comes the end of the Byzantine Empire. 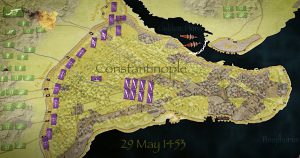 Inside the City Walls 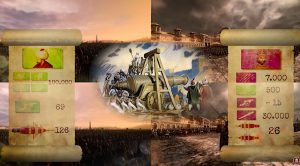 The Armies and the Huge Siege Canon 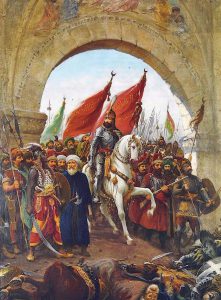 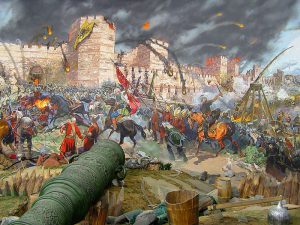