US Senator Bob Menendez, chairman of the Senate Committee on Foreign Relations, received an honorary doctorate from the Department of Political Science and Public Administration, at the University of Athens’ School of Economics and Political Sciences.

In his address, Menendez addressed the current challenges to democracy, stating amongst other: “this is a critical moment in history for the United States, for Greece and the world. Across the globe, freedom is under threat. It is incumbent on us to take up the mantle and do our turn as stewards of a cherished legacy started by Aristotle and Korais in Greece; and carried forward by Thomas Jefferson and Martin Luther King in the United States.”

The Senator spoke of Turkey as “the most persistent and proximate threat in the Eastern Mediterranean” in his acceptance speech.  Menendez made specific mention of the provocative overflights in the Aegean by Turkey, stating that “I expect the United States to hold Erdogan accountable. Despite being a NATO ally, Turkey is challenging Greek sovereignty with provocative flights. This is absolutely unacceptable behavior from a NATO country”.

During a meeting with Greek Prime Minister Kyriakos Mitsotakis on Friday, the Senator underlined that Greece is a stable democracy and a reliable partner and ally of the US in the southeast flank of NATO, and cited the importance that Washington ascribes to the port of Alexandroupolis. 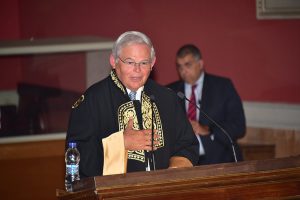