Gilgamesh Dream Tablet to be Returned 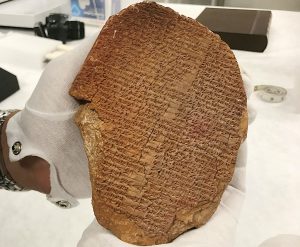 The Gilgamesh Dream Tablet is described as “stolen Iraqi property” in a civil complaint filed Monday. Federal authorities say the tablet was illegally imported into the US and they want the rare artifact returned to Iraq.

The artifact was sold to a US craft store for $1.6 million in an auction for display in the Washington, D.C.-based Museum of the Bible. Prosecutors allege that the auction house deliberately withheld information about its origins.

The 3,500-year-old artifact bears text from the Epic of Gilgamesh, one of the world’s oldest works of literature.