Give Iris her body back, Britain 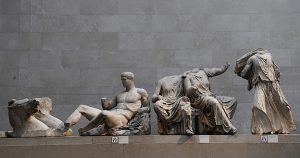 The Parthenon marbles at the British Museum in London. (Facundo Arrizabalaga/EPA-EFE/REX/Shutterstock)

A well written article which deserves attention. The author among other well-made points, writes:

“The problem Bruce’s beneficiaries have now run into is that those one-time “barbarians” have transformed into the rightful inheritors of Hellas. Greece is today revered as the cradle of Western culture, and who better to house that culture than the Greeks? The British turn this point around and argue that it was their foresight in whisking Iris and company off to the isles that spawned neoclassicism in the first place by reintroducing a forgotten style to their taste-making citizens.”

The author also points out that

“There’s an aesthetic case for unification, somewhere, and a geographic case for reunification in Greece.
No god or goddess should be made to bear the indignity of headlessness, and no visitor should be needlessly deprived of viewing a masterpiece that’s actually in one piece.” 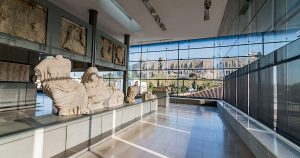 The modern, spacious, sunbathed Acropolis Museum with the Acropolis in the backdrop, is waiting for the return of Greece’s treasures.

The newly built Athens’s Acropolis Museum is the perfect place displaying these timeless artifacts and not the dark and gloomy presentation at BM. Simply it is the natural location, where the Museum’s open spaces let’s the visitors to simultaneously see the artifacts and view the Acropolis itself.

Elgin, the vandal and the thief, removed and stole:
247 feet—just under half—of the total friezes(1),
15 metopes(2), 17 pediment(3),
and various pieces of architecture figures from the Parthenon.
In addition, removed and stole one of the caryatids (female sculptures)
from the nearby portico of the Erechtheion,
4 fragments from the frieze of the temple to Athena Nike,
and architectural members from the Propylaia.

The stolen artifacts that are missing from the Parthenon must be returned to their origins.