The Rapa Nui community has offered a basalt replica of the eight-foot, four-ton sculpture called Hoa Hakananai’a, which was stolen in 1868. 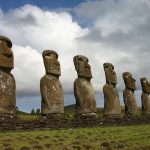 “The eight-foot-tall Moai sculpture at the British Museum is called Hoa Hakananai’a, which translates to “the stolen or hidden friend.” This name is fitting, since the four-ton statue was stolen from the island in 1868 by Royal Navy captain Richard Powell, and presented as a gift to Queen Victoria. She donated it to the national museum in London in 1869.”

“As reported by Agence France-Presse, Easter Island’s Ma’u Henna community, with support from the Chilean government, has offered to swap out the original piece at the British Museum for a replica…”

It is time for the British Museum to act in good faith, recognize the illegal acquisitions of artifacts and return them to their origins.

Sources: Above links and article by: Sarah Rose Sharp