These actions are nothing less but Looting of artifacts, and the ones who removing them from their place of origins are thieves. 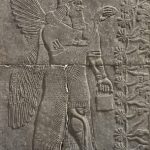 “It’s a matter of principle, similar to the Elgin Marbles,” Fareed Yasseen, Iraq’s ambassador to the United States, tells NPR.

“The (Parthenon) Elgin Marbles are marble sculptures that stood in the Acropolis of Athens in ancient Greece. They were removed and shipped to Britain in the early 1800s, while Greece was part of the Ottoman Empire.”

And the “excuse” of the thieves is:

“The provenance of the Assyrian relief provides a glimpse into the freewheeling world of archaeology in the 19th century, when English archaeologist Austen Henry Layard was given permission by the Ottoman sultan to excavate Nimrud and ship off whatever he found to patrons and friends.”

All these sound very familiar!