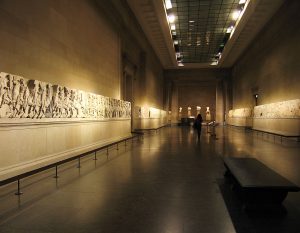 Greek (use toolbar to return to English original)
Dame Janet Suzman, chair of the British Committee for the Reunification of the Parthenon marbles and actress in an article on Saturday to Nea newspaper answers to the director of the British Museum.

“I am neither an intellect nor an academic. My position in the committee is of a simple visitor of the museum and as a visitor I can see clearly that the Marbles are in the wrong place. They need Attica’s sun to shine on them with background the blue sky. They ask to be reunited with their other half at the New Acropolis Museum where a place is always waiting for them” said Suzman in her article.

Referring to British Museum director Hartwig Fischer statements that the “museum will not return the marbles permanently to Greece” she commented “I do not trust the terminology of the art historian and of the art directors when they arrogantly refer to ‘creative actions’ implying that the Marbles acquire another, equally important, nature when they are violently deprived from their siblings”.

However, she acknowledged that the director “is forced to speak diplomatically” and attacked the Museum’s custodians that “obviously as complacent-crypto-imperialists do not examine something that is fair and right”.

Concluding, Suzman quoted another member of the Committee (Alexi Kaye Campbell) “Asking for something back of huge significance which has been taken from you when you were under foreign occupation is a demand for simple justice”.